I have been quilting for Susan for several years now and her quilts never cease to amaze me. Her piecing is spectacular and this quilt was no exception! I think the best part of quilting for customers are the friendships that begin with our love of quilting.

When she first saw Edita Sitar’s pattern Alaska, she knew that she wanted to make it! She had begun piecing it pre covid lock downs and delivered it to my deck and left the quilting decisions to me.

I have always loved Betty’s quilts, her piecing is amazing! Her quilts are usually challenging projects sent to her from her family and she always proves that she is more than up to the task.

When she started piecing her North Star Quilt by Elizabeth Hartman she also reminded me of her integrity that I also really respect about her. She understands the hard work that designers put into their work and encourages others to purchase their own copies of patterns.

This quilt was such a joy to quilt and I chose the pantograph Star Swirl as it added movement and reminds me of the night sky.

Betty chose a soft solid grey for her backing which really shows the quilting. I pieced the back from her yardage as I do for many of my customers.

This winter some of my customers who normally head south for the winter have made the choice to stay put. Jeanette also decided to get some of her projects from the past completed.

Another Block of the Month quilt of Jeanettes from years ago. She commented how much nicer today’s cottons are for quilting. Still this quilted up beautifully and will be used instead of just blocks in a box.

I always offer to trim my customers quilts at no extra charge. Using my 12’ table on my Longarm makes this task a quick and efficient task.

It’s been an extremely cold and busy week, thankfully the temperatures may be warmer next week still cold but bearable.

Working on this recent block my mind was elsewhere I guess or maybe I was just tired and I trimmed my half square triangles to the finished size which led me to make a much smaller than intended version.

I then proceeded to make another block but decided to give the 1/4 foot a try on my Juki and again night time tired sewing I failed to make sure it was a scant 1/4” so my block is smaller…both blocks will however find their way into the quilt.

It is my quilt and the reason I chose to make it was to have fun. I enjoy making different blocks and using new methods and rulers.

I have the blocks on a design wall which I highly recommend having.

The latest customer quilt is off the machine and will wait for it to be delivered before I post pictures. Other than just a peek.

This is another one of Joan’s quilts. It’s batik fabrics really pop off of the black fabric doesn’t it. When discussing the quilting she mentioned that her Grandson might like it for his dorm and so requested the quilting not be floral or feathers.

The pantograph is a favourite of mine. It was designed by a friend from my early long-arming days when a group of us regularly chatted on Longarm Chat. It’s called Star Swirl and is by Michelle Wyman.

Joanne approached me about quilting a quilt that she was just starting. It was for her Granddaughter and was different than her usual more traditional projects.

When she finished the top and brought it to me, she left the quilting to me. I immediately fell in love with the colours and the backing that she chose.

I love orange and this backing made me think of flames. The top was perfectly pieced and fun to quilt. This was one that was hard to give back.

I first started attending our local quilt guild when I was in my late twenties. I had been interested in quilting in my early teens but had no idea where to start, not knowing anyone who quilted.

Then I attended Quilt Canada when it was held here in Thunder Bay in 1992 and attended some classes. That is where I met my friend Alva who became my mentor.

I recently had the privilege to quilt a round robin style of quilt for a friend Bobbie who was in a group of quilters that were a very big part of quilt Guild for many years and helped to bring Quilt Canada to Thunder Bay.

It was a very interesting looking quilt and with permission I shared her quilt with a couple of groups that I belong to and was asked how it was made. So I questioned Bobbie and she shared pictures of her sisters quilt and progress. The rule was that each person started with a fat quarter and passed to the next Quilter who was to cut it horizontally and vertically and insert six inch rows of piecing:

Next Jean Tozer added her strips

Alva being Alva wasn’t one to follow the rules and decided to make two vertical cuts really changing the look.

Elaine Pond was next: 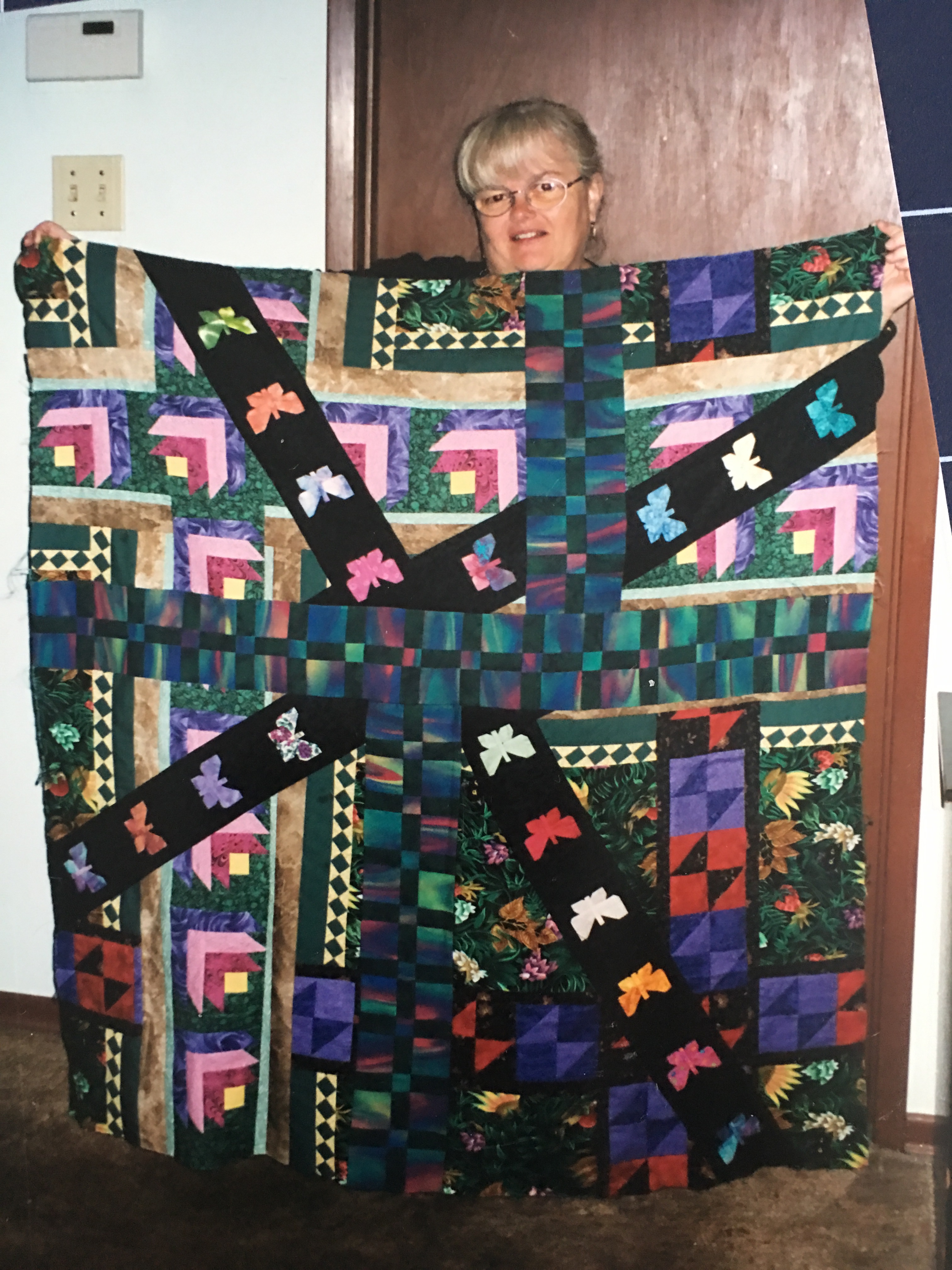 And finished by Bobbie: 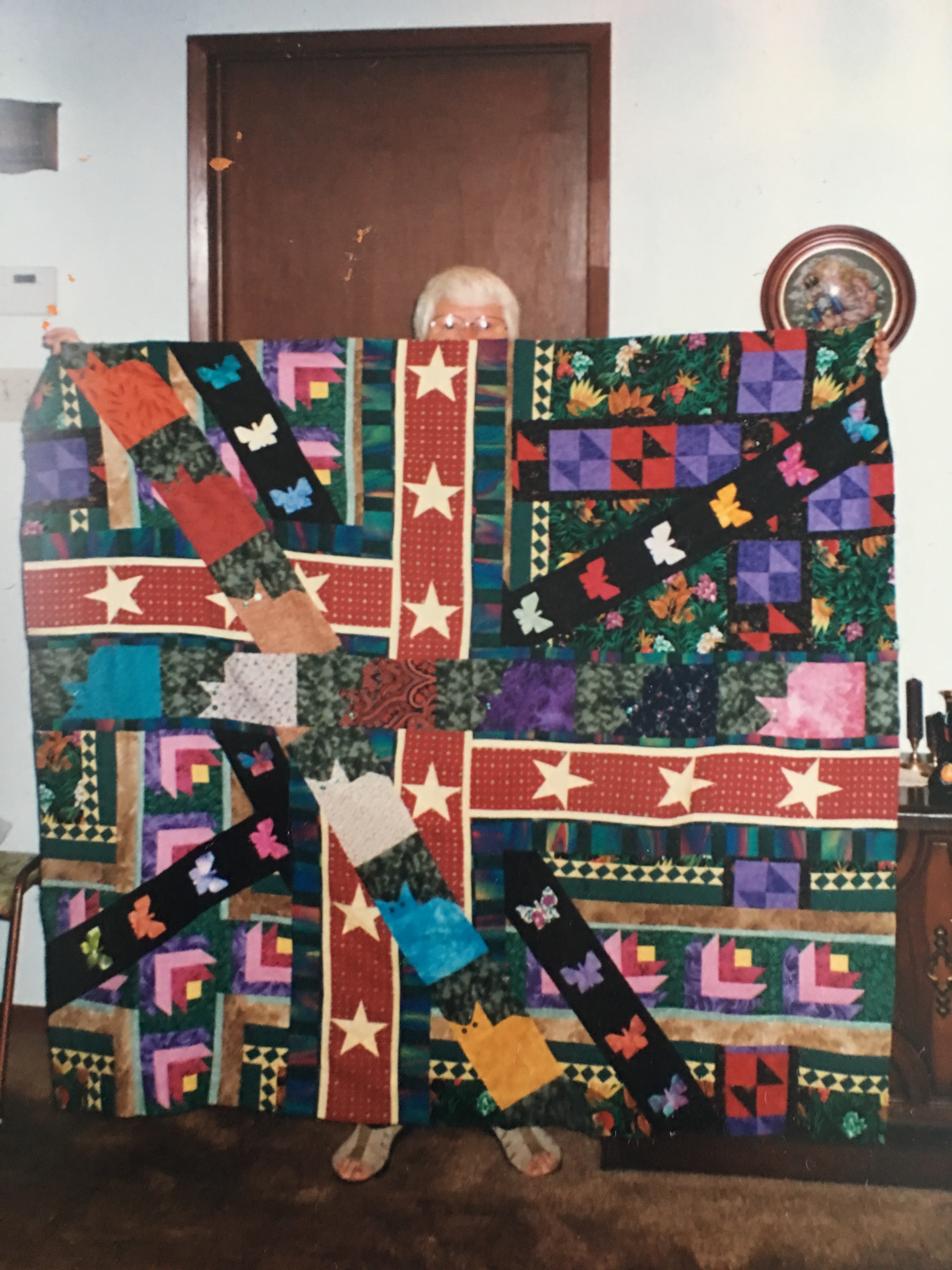 I loved spending time with these ladies and learnt so much about quilting and life from them. I remember the group of them liked to sit in the front row at guild and often would get the giggles like young school girls they really had fun!

Heather’s quilt really showcased her fabric choices which are bright and fun to look at. I chose to quilt it using the Hearts and Bloom Pantograph.

My customers will often ask me to choose the quilting design which is fun for me and maybe a little overwhelming for newer quilters. I carry many different designs and am always more than happy to add to my collection when a customer would like something that isn’t in my collection. 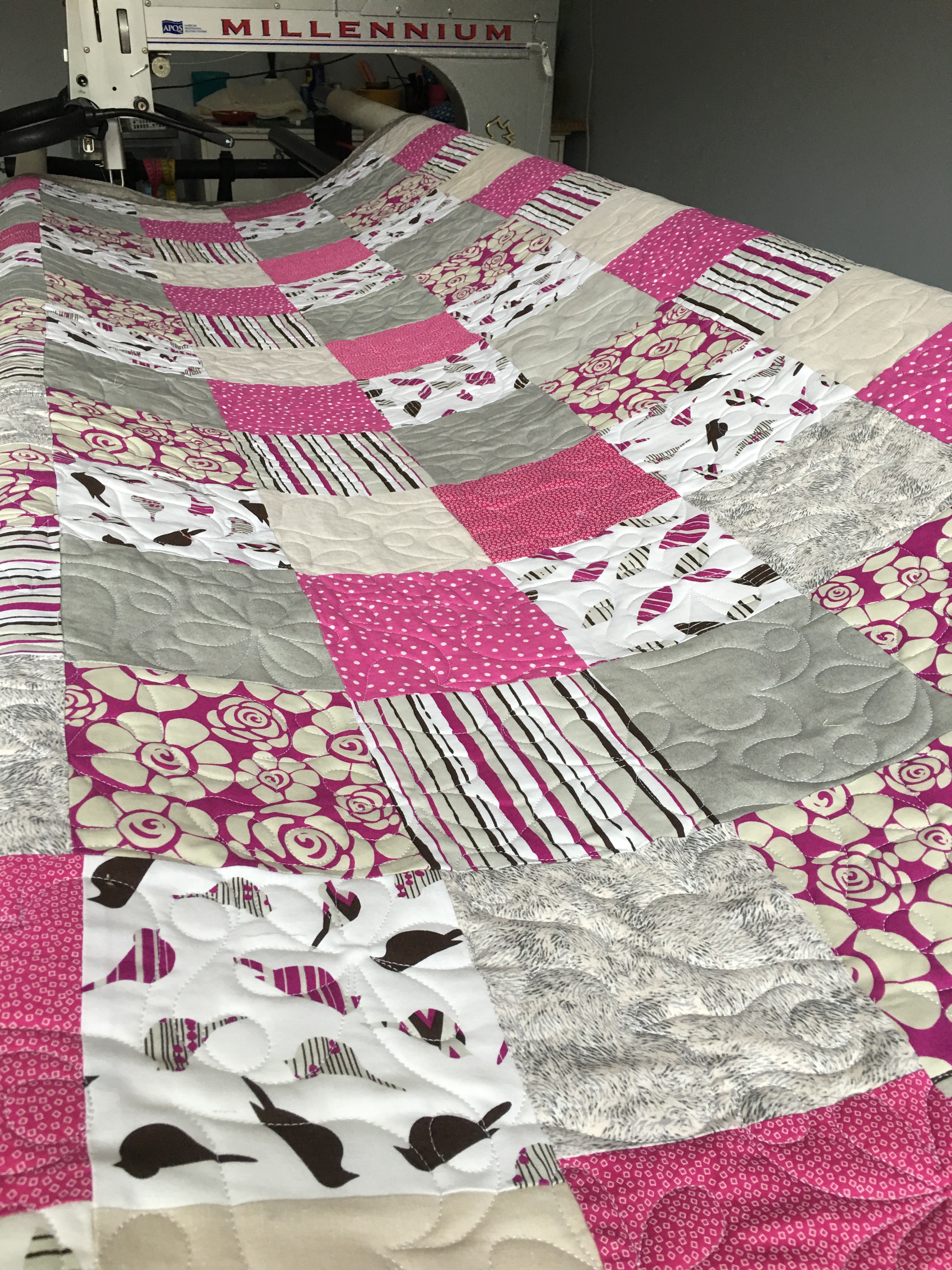 Becky used the Basic X Block Ruler and gorgeous Batik fabrics to make her quilt. It was quilted with the Pantograph Swirl of Thorns And Glide thread. 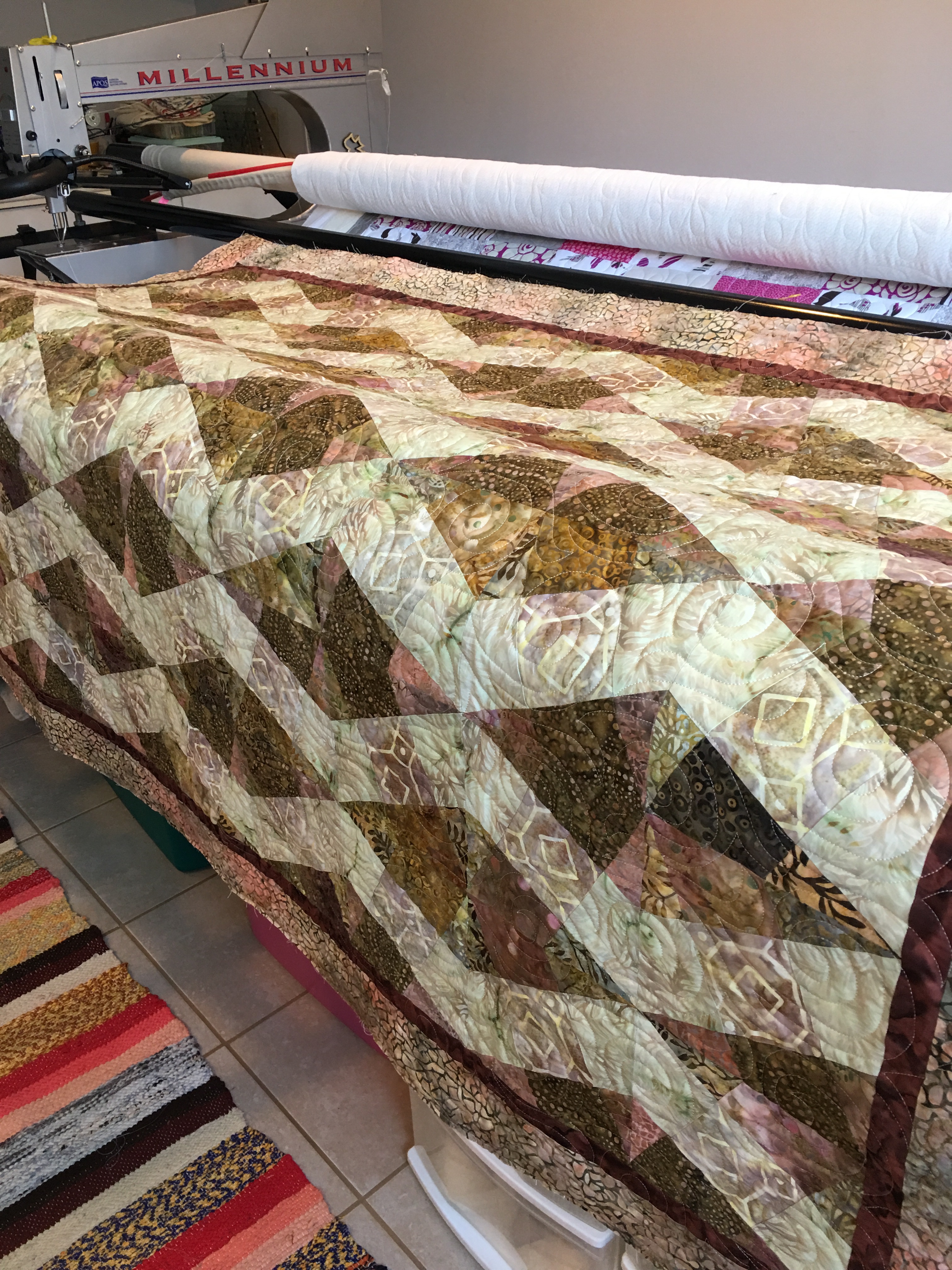 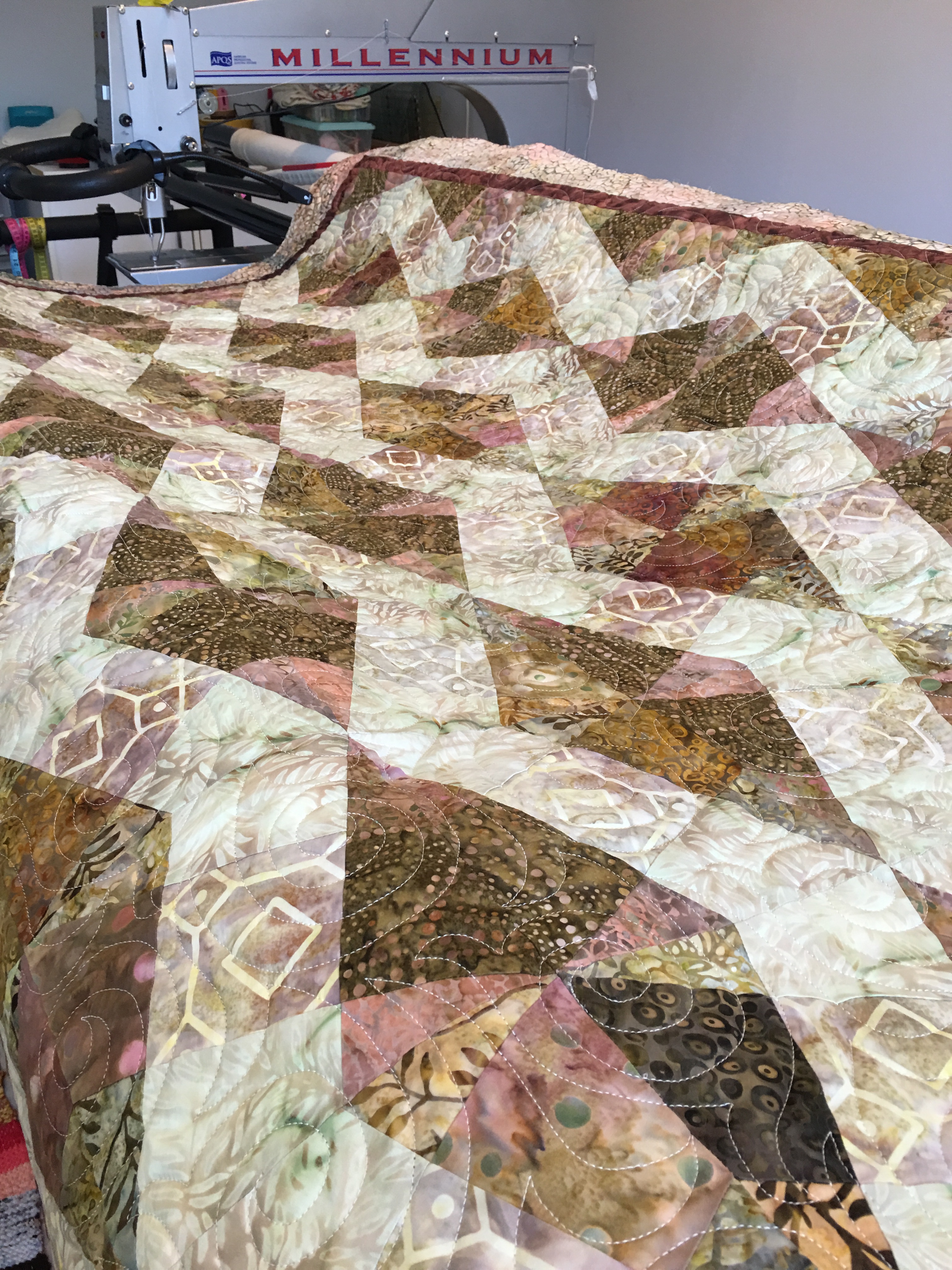 Millie has been entrusting her quilts to me for several years now and it’s always a pleasure to quilt for her. These recent two quilts were a lot of fun to quilt.

This first one was quilted using the Pantograph Shasta Daisy, it always makes me smile when I see it.

Her second quilt also perfectly pieced called for a floral Pantograph so I chose Rhapsody. I have customers that like to choose the designs for their quilts and I will order new Pantographs for them if I don’t have what they have in mind, however many people tell me to choose and enjoy being surprised when the receive their quilts back. I have recently added to my Pantograph collection and am looking forward to trying them soon. 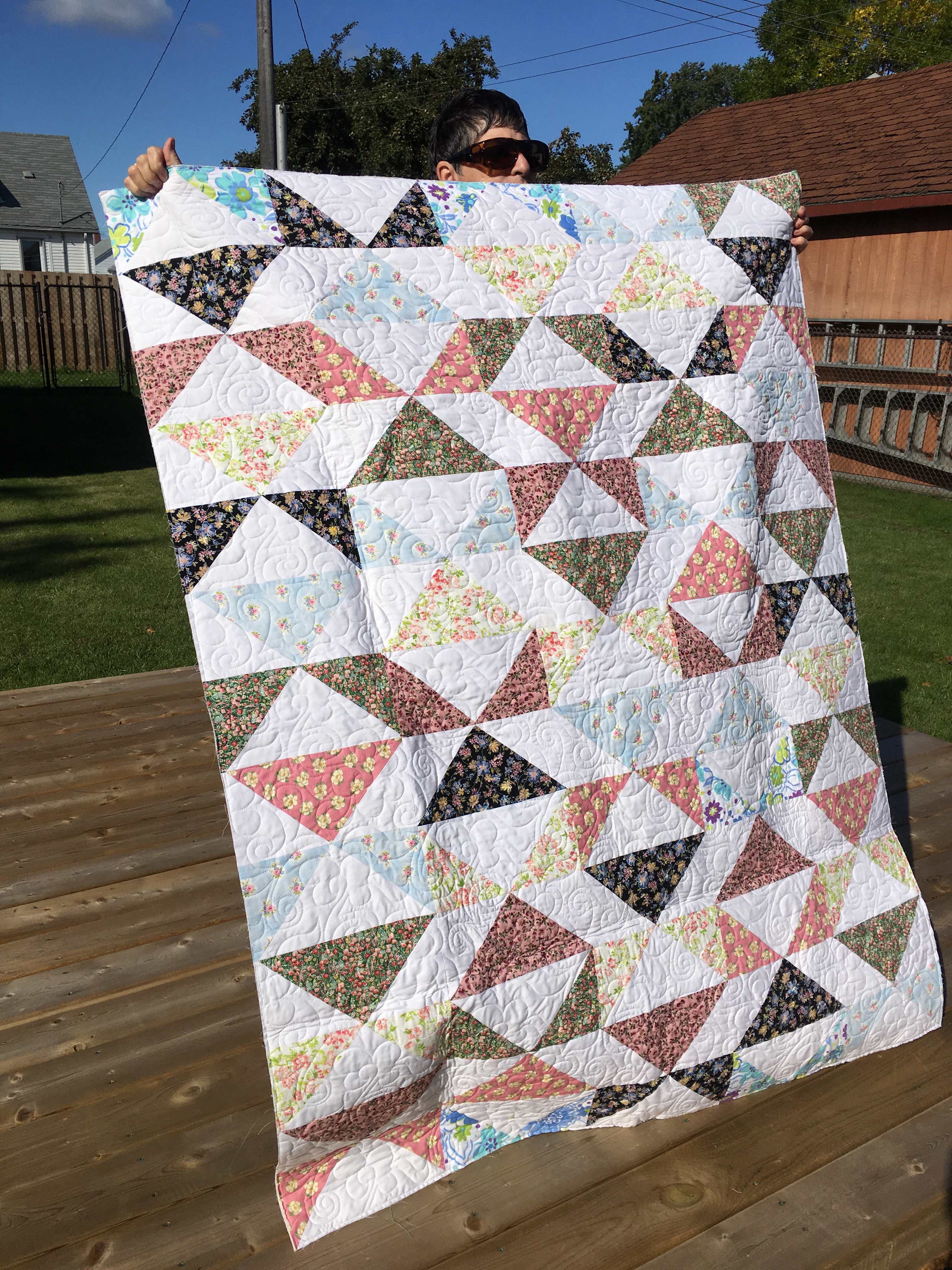 Millie’s backing for this quilt was so soft and vintage looking a perfect fit for this sweet quilt.